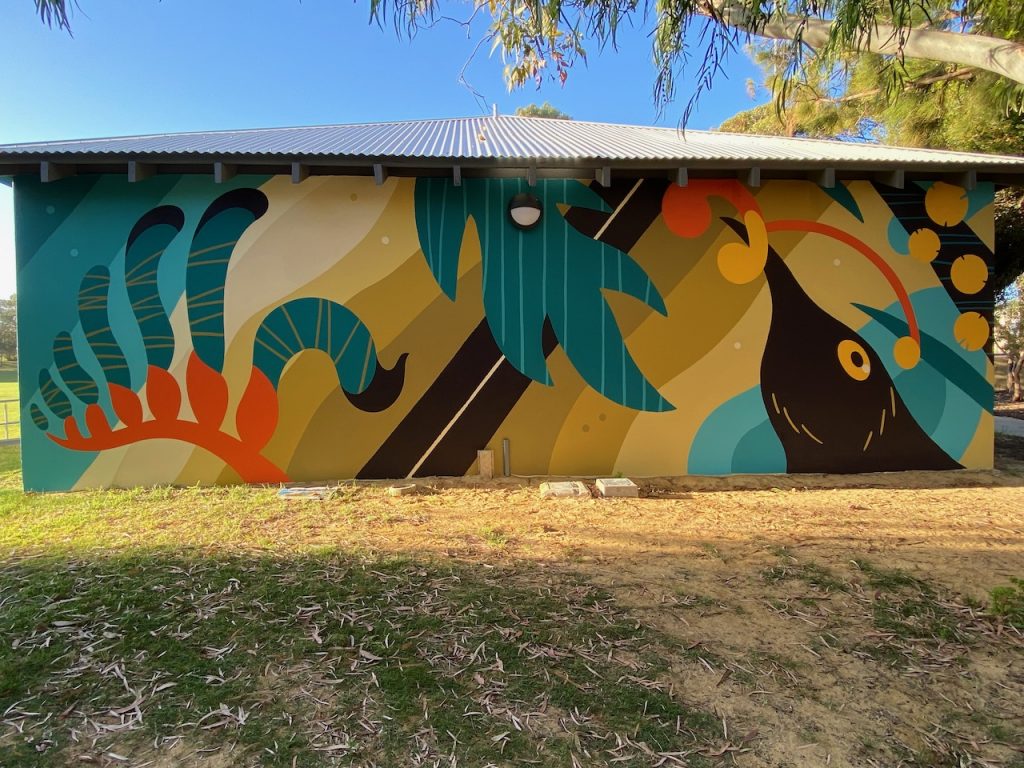 As part of the City’s annual Mural Arts Program, Darren was commissioned to produce this mural titled “Edges” in December 2021. The work responds to the theme of the Edge, inspired by a collaboration with Edge Youth Centre, the coastal location, and the proximity to the dwindling natural bushland areas of Perth. Falkland Park Mural […] 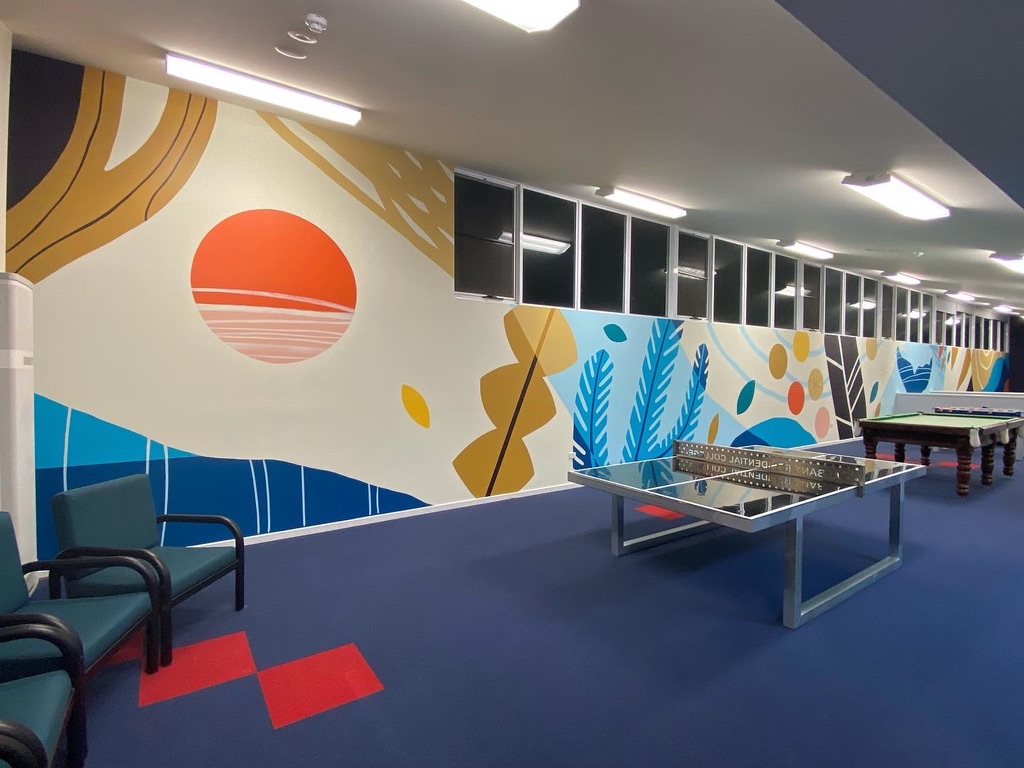 I was invited back to my old home town of Albany, where I first started painting murals professionally over 20 years ago, to instal a mural at the Residential College. The student residents who board there, whilst studying were invited to contribute ideas of what it’s like living on the South Coast. The mural is […] 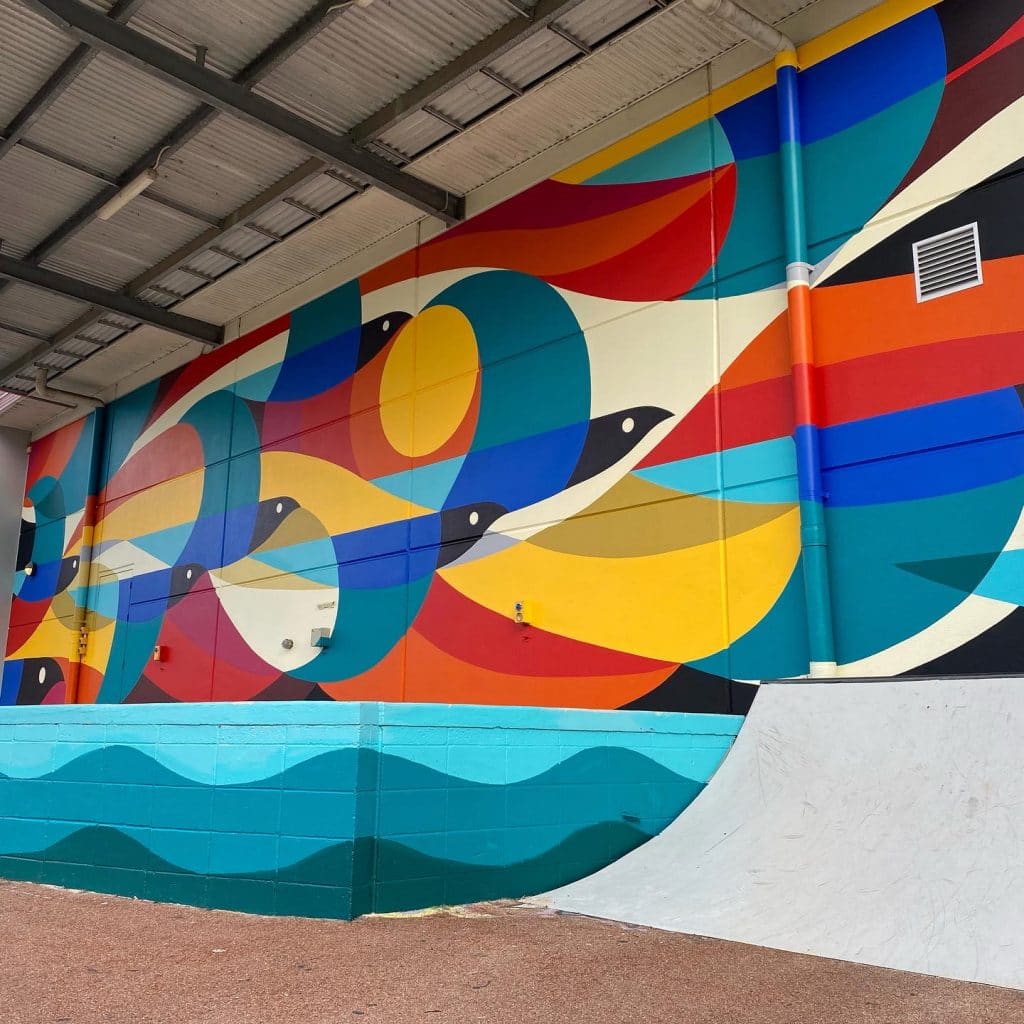 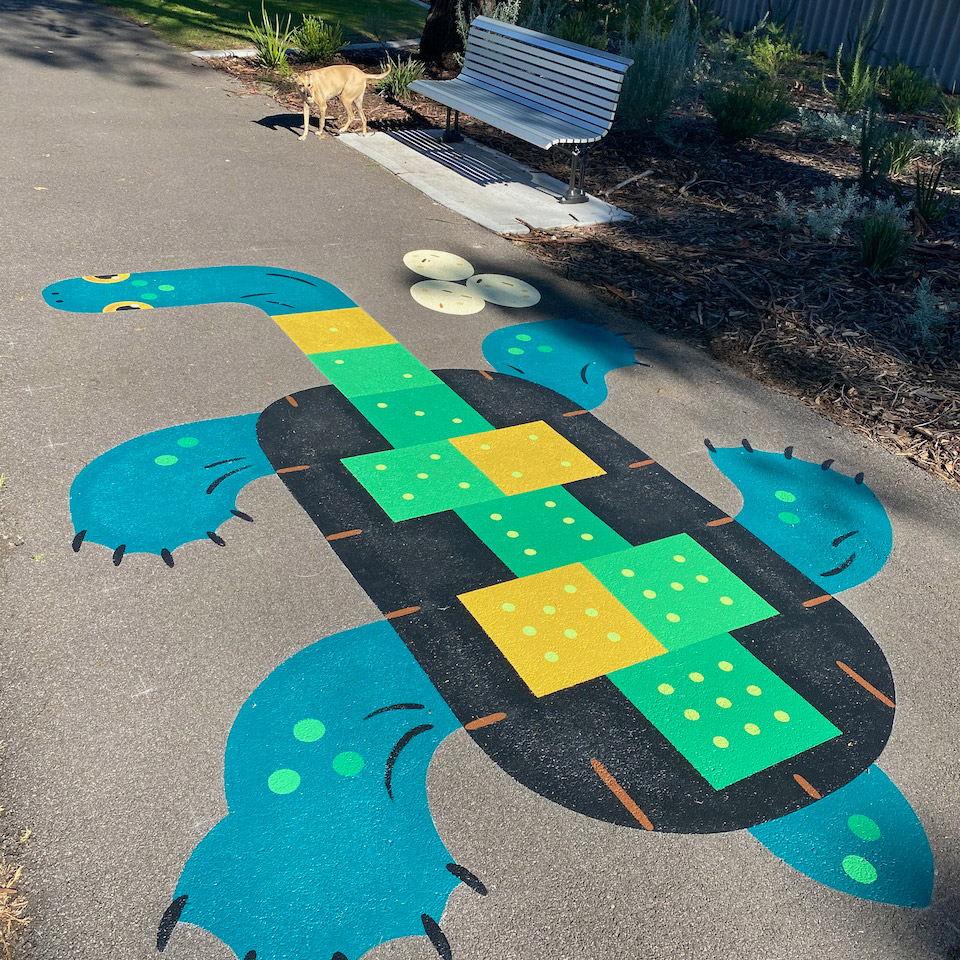 Design and painting of footpath stickers and hop scotch game as part of a interpretive walking trail depicting the local fauna of the Beeliar Wetlands area. 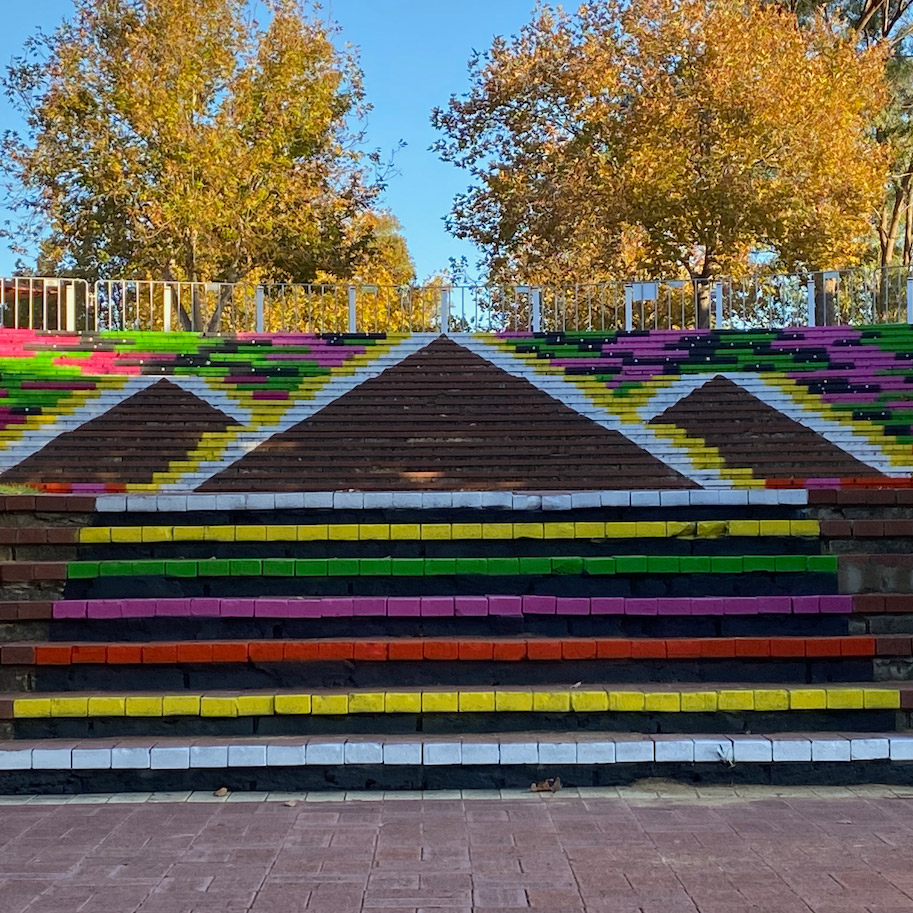 Design and painting of a temporary artwork for the opening of the Kwinana Fringe Festival. 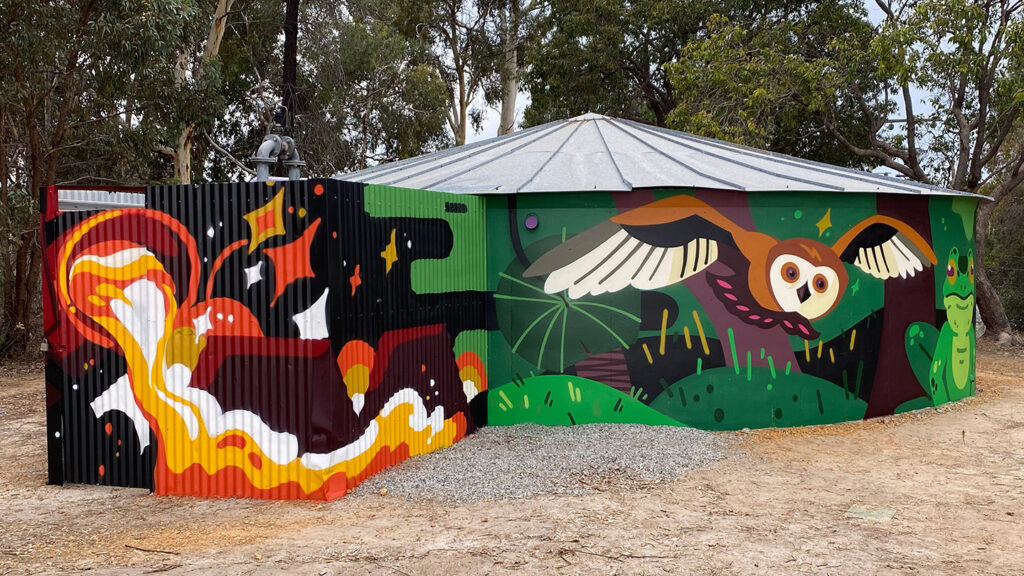 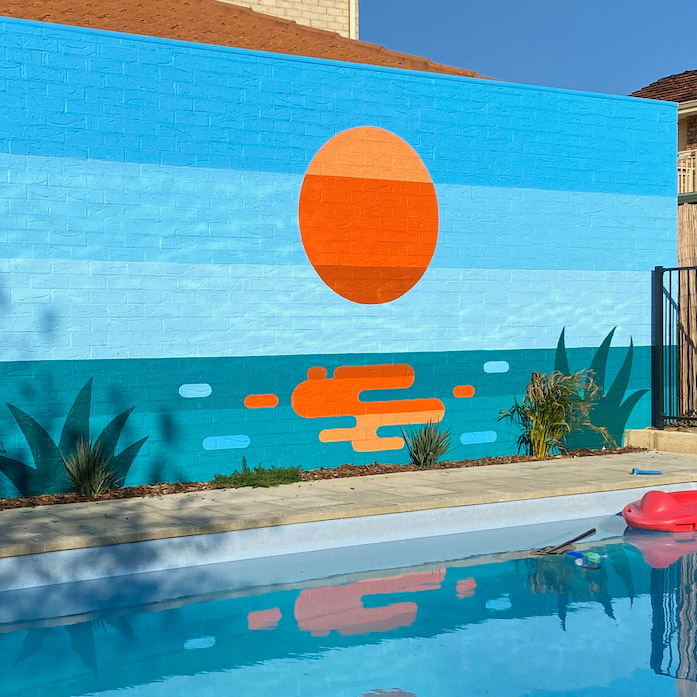 Private commission to enhance the visual appeal of the swimming pool area of a local home, the mural utilises bold colour and organic shapes to soften the hard architectural edges.

Media: Woodbridge Station UnderpassThe Right Track Urban Art project paired artists Lawry Halden and Darren Hutchens with a group of Year 8 and 9 students who are part of Governor Stirling SHS’s Alternative Personalised Program in Schools program. Using the theme “dog days”, the artists and students collaborated to design and then paint the 290sqm […] 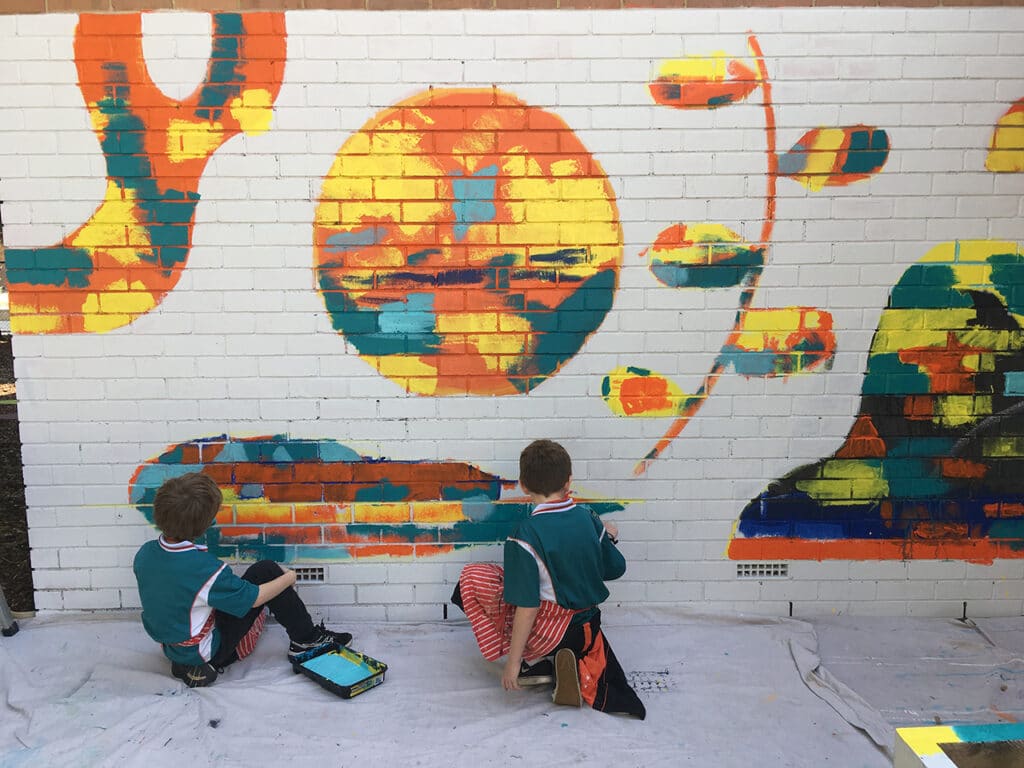 Darren and Alex worked with the staff and students of Bungaree Primary School in Rockingham over a two week residency as part of the Awesome Arts Creative Challenge program. Years 3, 4 and 5 students were engaged in a range of creative activities, culminating in the design and collaborative painting of a mural. The colourful […] 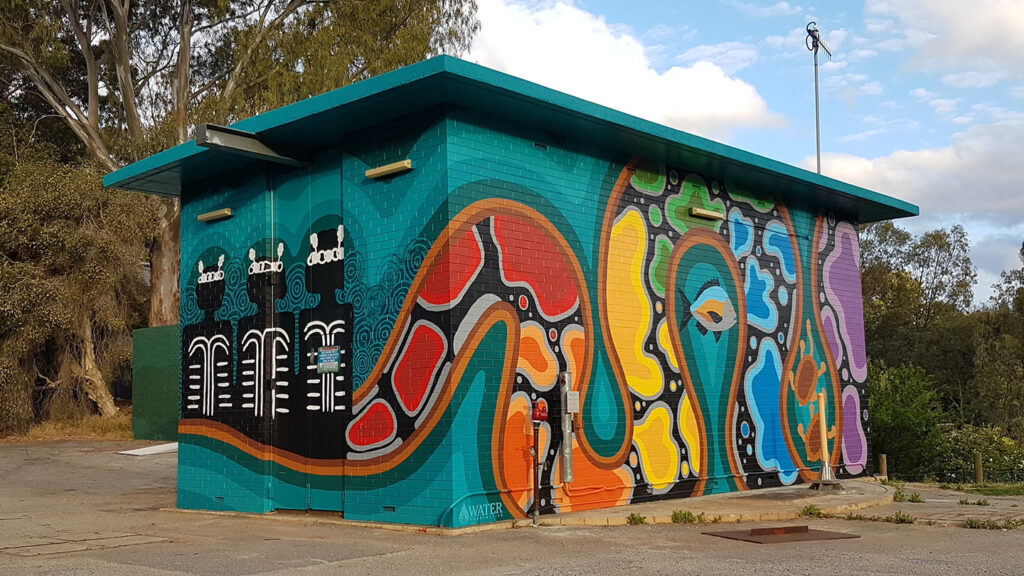 The community mural at the Guildford Rd/Bridge St site responds to its riverside location and nearby Success Hill reserve. It tells the story of the Waugal and depicts the links between people, place and sources of water. It includes imagery of ancestors in ceremonial dress and is a powerful cultural statement. Darren managed the consultation, […]